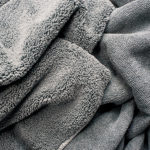 Meet the perfect, double-density towel for drying off your four-legged family members. Our 90x60cm terry towels feature 80% polyester for quick-drying durability, and 20% nylon for softness and comfort. Each side of the towel features a different density of terry fabric.

Besides drying, the towels also work as a small blanket for traveling, snuggling and protecting furniture.

Reusable, long lasting and machine washable. Unless you are using them for tug-of-war with your fur baby, towels are long-lasting.

Max temperature should be set to WARM. However, for resistant stains or smells, HOT can be attempted. Set wash cycle to NORMAL.

Towels can be dried in dryer at any preferred temperature setting.

Free Shipping on all US orders over $50!

All US-based orders are placed to ship directly to you as early as the same day or the next day! Same and/or Next day shipping available excluding holidays, Sundays, or otherwise stated. Order must be completed before 12 noon for same-day shipping. Your product will arrive within 1 to 4 Business Days.

If return is approved, we will send you a shipping label to return your order.

Only logged in customers who have purchased this product may leave a review.

The weather is picking up, which means no more exc

We use our microfiber dog towels for everything. W

Big shout out to @goldiebrothers for helping us re

Not one but three holidays this week! First we kic

Be Our Pawlentine 🌹 GIVEAWAY 🌹 We're spreadi

JOIN US TO HEAR MORE STORIES AND GET INSIDER OFFERS

What are you looking for?